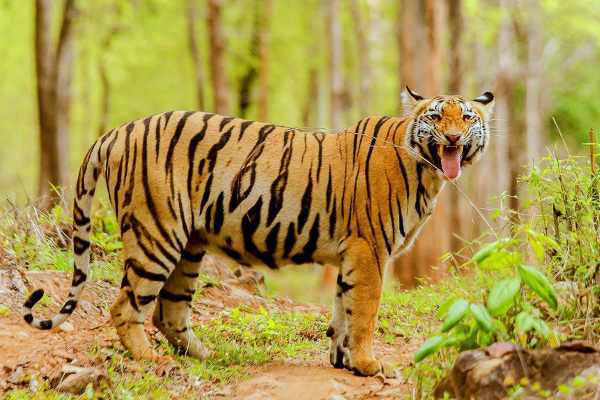 Rajkot to Tadoba is a popular route for tourism. Tadoba National Park or Tadoba Andhari tiger reserve is located in Maharashtra district. It is one among the fifty tiger reserves that are located in India. It is the largest and the oldest park in the state. The park gets its name from the tribal God worshipped in this region, Taru or Tadoba and, the river that runs through the region, Andhari. Taru was a chief in the tribal village who was killed by a tiger. He is represented as a God and a shrine has been dedicated to him on the banks of the river. Tribes in the buffer area celebrate a festival in the shrine during winter season.Tourists are however not allowed to be a part of this festival.

"In every walk with nature,you get more than what you seek".

Safari is the main attraction in Tadoba national park. The park provides open Gypsy safari and bus safari along with guides. Open gypsy safari is famous for spotting wild digs, sloth bear and others. The jeep or gypsy safari has to be booked in advance in the DFO office near the park. Spot booking is available in the Navegoan gate of the park. Online facilities are not available. Private jeeps can be hired in nearby taxi stands. There is a great history behind the name of Tadoba National Park. Tadoba or Taru was the name of god of tribal people who reside in the dense Tadoba region of the forest. It is believed that Taru was a chief of village, who was killed in a legendary encounter with a tiger.  After this, a shrine was made dedicated to the God Taru that exists under a huge tree and on the bank of Tadoba Lake. Likewise, ‘Andhari’ name was given due to Andhari River that wanders through the forest. Earlier, the kings of Gond ruled this forest in the vicinage of the Chimur hills. During 1935, hunting was totally restricted, but later in the year 1955; the area of 116.54 sq. km (45.00 sq mi) was acknowledged as The National Park. Andhari Wildlife Sanctuary was made on the next forests in 1986 and later in the year 1995, the park & the sanctuary were combined together to form the present India’s 41 “Project Tiger”-Tiger Reserves.

Taxi from Rajkot to Tadoba is readily available at CabBazar.

Rajkot to Tadoba by car is well connected via NH47 which is a very convenient and comfortable drive. Rajkot to Tadoba distance is 1227 Km and is a 23 hours journey. Other famous tourist places on this route and nearby are :

CabBazar is committed to keep the pricing as simple and clear as possible. So, we provide one price for your Rajkot to Tadoba taxi which covers a specified maximum kilometer and maximum days. So, you know upfront how much taxi is going to cost you and plan your budget well.