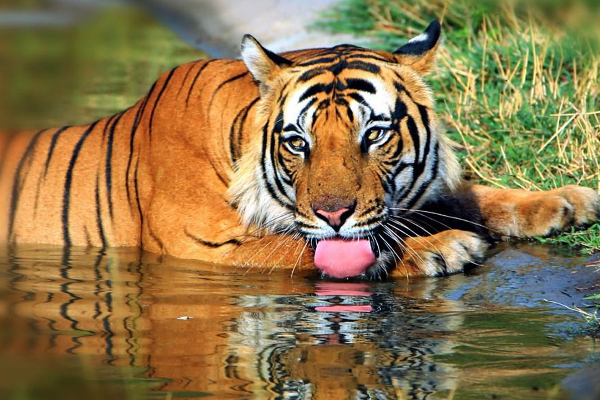 Rajkot to Kanha is a popular route for tourism. Kanha Tiger Reserve, also called Kanha Kisli National Park, is one of the tiger reserves of India and the largest national park of Madhya Pradesh, state in the heart of India. The present-day Kanha area is divided into two sanctuaries, Hallon and Banjar, of 250 and 300 sq km respectively.

"Any day spent in National Park is a god day.

The park has a significant population of the Royal Bengal tiger, Indian leopards, the sloth bear, barasingha and Indian wild dog. The forest depicted in the famous novel by Rudyard Kipling, The Jungle Book is based on jungles including this reserve. It is also the first tiger reserve in India to officially introduce a mascot, Bhoorsingh the Barasingha.The Park is respected globally for saving the Barasingha from near extinction. No doubt, it is one of the best managed parks in Asia and a part of Project Tiger. National Geographic's award winning 'Land of the Tigers' was shot here, but the park is home to leopards, wild dogs and Barasingha as well. A safari in Kanha will surely get you thrilled, the way you were on your first trip to the zoo, as a child.

Taxi from Rajkot to Kanha is readily available at CabBazar.

Rajkot to Kanha by car is well connected via NH47 which is a very convenient and comfortable drive. Rajkot to Kanha distance is 1220 Km and is 24 hours journey. Other famous tourist places on this route and nearby are :

CabBazar is committed to keep the pricing as simple and clear as possible. So, we provide one price for your Rajkot to Kanha taxi which covers a specified maximum kilometer and maximum days. So, you know upfront how much taxi is going to cost you and plan your budget well.