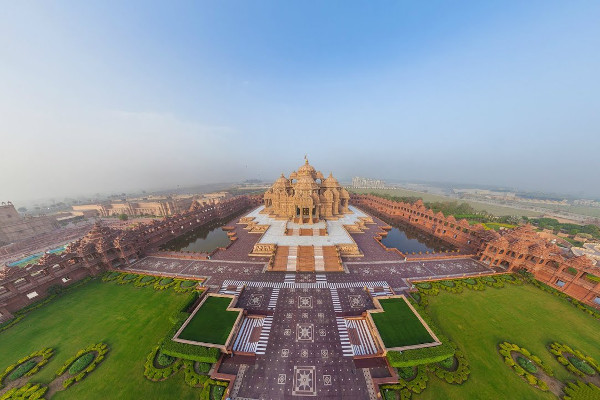 Rajkot to Gandhinagar is the very popular route for both domestic as well as foreign tourists. Being the capital city of Gujarat and the second planned city in India after Chandigarh, Gandhinagar has become the commercial and cultural hub of the state of Gujarat.

"Named after the father of the nation, Mahatma Gandhi, the city of Gandhinagar is India's first smart city, and the second planned city after Chandigarh. This capital city of Gujarat had the vision of being an equitable urban centre that provides a high quality of life to all its citizens."

Situated on the bank of Sabarmati river, Gandhinagar offers a rich cultural heritage, a very beautiful well organized city, awsome architecture design, magnificient holy temples, historical monuments and forts and has a very important place in nation's struggle for freedom. The city is named after the Father of Nation, Mahatama Gandhi. The Gandhi Ashram and the various national movements that took place during the colonial era fills visitor with the feeling of patriotism. The most famous tourist attraction in Gandhinagar is Swaminarayan Akshardham Temple is made of 6000 tonnes of pink sandstone which makes it look beautiful and the temple with its spiritual value and architectural beauty attracts thousands of tourists every year. There are more holy places like Hanumanji temple and Brahmani Temple which are also a must visit.

Taxi from Rajkot to Gandhinagar is readily available at CabBazar.

Being an Aggregator, CabBazar provides you enormous car options for your Rajkot to Gandhinagar taxi booking. You can mention your specific preference, if any, while raising a taxi booking request. Our partnered taxi services providers have various cars available with them for Rajkot to Gandhinagar taxi service. At high level, we classify taxi in below four categories :

CabBazar is committed to keep the pricing as simple and clear as possible. So, we provide one price for your Rajkot to Gandhinagar taxi which covers a specified maximum kilometer and maximum days. So, you know upfront how much taxi is going to cost you and plan your budget well.