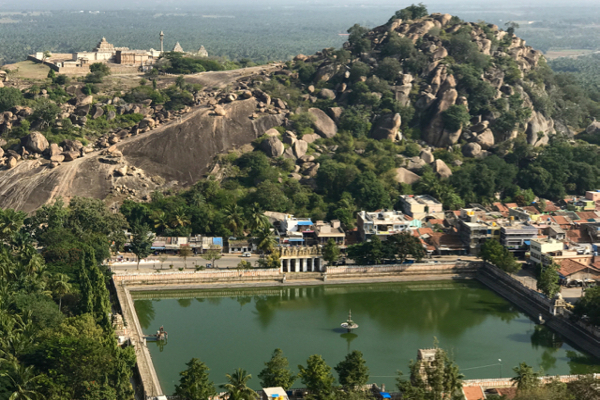 "During the auspicious event of Mahamastakabhisheka, held in Sravanbelagola once in 12 years, attracts a huge number of devout worshippers from all over the world. As part of the ceremonies that last for about 20 days, the image of Bahubali or Gomateshwara is anointed with 1008 kalashas (painted earthen pots) of water, milk, coconut water, clarified butter, saffron, jaggery, bananas, sandal paste and marigold flowers."

Shravanabelagola is famous for the Bahubali Statue of Lord Gomateswara (son of the first Jain tirthankara named Lord Adinatha). After defeating his brother Bharatha over the kingdom, Lord couldn't feel any happiness and thus gave his brother the kindom and attained Kevalagnana. Famous with several Jain temples and historical sites, Shravanabelagola has two hills called Vindhyagiri and Chandragiri where most of the monuments are located. Chandragiri has 14 shrines among which Chamundaraya Basadi, Chandragupta Basadi, Chandraprabha Basadi, Kattale Basadi and Parshwanatha Basadi are the most visited ones.

Taxi from Bangalore to Shravanabelagola is readily available at CabBazar.

Shravanabelagola experiences monsoon between the months of June to September. Heavy rainfall is the characteristic of the region. The best season to visit Shravanabelagola is the winter season.

Being an Aggregator, CabBazar provides you enormous car options for your Bangalore to Shravanabelagola taxi booking. You can mention your specific preference, if any, while raising a taxi booking request. Our partnered taxi services providers have various cars available with them for Bangalore to Shravanabelagola taxi service. At high level, we classify taxi in below four categories :

CabBazar is committed to keep the pricing as simple and clear as possible. So, we provide one price for your Bangalore to Shravanabelagola taxi which covers a specified maximum kilometer and maximum days. So, you know upfront how much taxi is going to cost you and plan your budget well.