Bangalore to Mysore is very popular route among both domestic as well as foreign tourists. Mysore is a royal heritage and is famous for its extravagant Dussehra celebrations.

"Mysore is also known as the “Garden City” or the “City of Palaces” and has also earned the nickname “Ashtanga City" for the proliferation of wonderful yoga teachers who reside here."

Mysore or Mysuru, also known as 'The City of Palaces', is the cultural capital of Karnataka and carries a rich history of more than 600 years. It is placed at the foothills of Chamundi Hills and the mythological belief is that the presiding deity of Mysore, Goddess Chamundeshwari killed the Demon king Mahishasur and saved people from his cruality. The rich heritage city of Mysore carries the history of being one of the three largest Princely states in the British empire of India. The most popular attraction here is Mysore Palace. It gets even more beautiful on every Sunday and during Dussehera celebrations when its brightly lit-up in evening. Mysore is also famous for its silk sarees, yoga, and sandalwood.

Taxi from Bangalore to Mysore is readily available at CabBazar.

The best time to visit Mysore is the winter season from October to February. The weather is cool and pleasant. It is also the time of the famous Dussehra Festival. The city of Mysore decks up with extra pomp, and fervor for the festival, with the magnificent Mysore Palace, adorned with beautiful illumination. 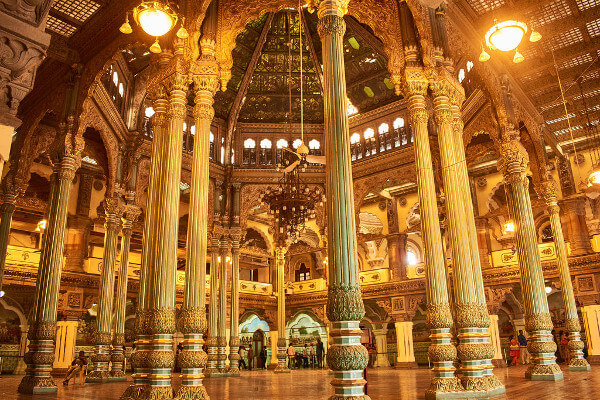 Mysore Palace, also known as Amba Vilas, is the the official residence of the Wadiyar dynasty who ruled the Kingdom of Mysore from 1399 to 1950. The original palace built of wood, got burnt down in 1897, during the wedding of Jayalakshammanni, the eldest daughter of Chamaraja Wodeyar and was rebuilt in 1912. The strikingly embellished and finely chiselled doors lead one to richly and elegantly ornate rooms. The exquisitely columned Durbar Hall, the solid silver doors, the finely incised mahogany ceilings and many other embellishments of the palace make one spellbound while giving an idea of the exuberant lifestyle of the royals.

The palace remains illuminated during 10 days of the renowned Mysore Dasara festival with around 1n00,000 light bulbs from 7 pm to 10 pm. During the festival the Chinnada Simhasana or Ratna Simahasana that is the royal throne decorated with fascinating designs on its gold plates is displayed. Sound and light show is conducted on all days excepting Sundays and public holidays from 7:00 pm to 7:40 pm.

CabBazar is committed to keep the pricing as simple and clear as possible. So, we provide one price for your Bangalore to Mysore taxi which covers a specified maximum kilometer and maximum days. So, you know upfront how much taxi is going to cost you and plan your budget well.

Taxi from Bangalore to Pondicherry